A multiferroics platform for axion electrodynamics 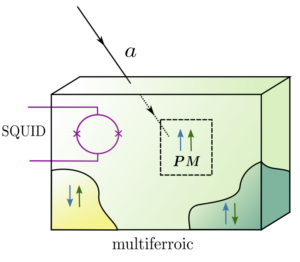 Dark matter is one of the key elements in the widely accepted Lambda-CDM model of modern cosmology. It has been proposed to explain a variety of observed effects astronomy, such as the rotational velocity curves of galaxies, and is expected to make up about 27% of the matter density of the universe. However, so far the only evidence for its existence is through gravitational attraction, and it has never been directly detected.

The theoretical axion particle is a prominent candidate to be a component of dark matter. It was originally proposed to solve the still outstanding strong CP problem in Quantum Chromodynamics (QCD). Additionally, unified frameworks of physics such as string theory generically produce models containing such particles. They interact with matter through their coupling to electromagnetism, and should leave distinct signatures in materials with the correct properties.

We develop novel concepts to apply Dirac materials as dark matter sensors. Because of their tiny band gaps Dirac materials promise to improve the sensitivity for dark matter particles in the sub-MeV mass range by many orders of magnitude. We study the influence of impurities on the detection of rare events. Also, based on the natural anisotropy of the material’s crystal structure we introduced a new mechanism leading to daily modulations within the dark matter detection sensitivity. These fluctuations are connected to earths rotation. To identify materials examples, we apply modern methodology of materials informatics. Our research has revealed various candidates in the space of organic molecular crystals. These materials might constitute the foundation to future dark matter sensors.

Our research is linked to a grant at Stockholm University. For more information, see http://axiondm.fysik.su.se/

– Mass fluctuations and absorption rates in dark-matter sensors based on Dirac materials, B Olsthoorn, AV Balatsky Physical Review B 101 (4), 045120 (2020)

The Nordic Institute for Theoretical Physics

The Royal Institute of Technology

The University of Connecticut